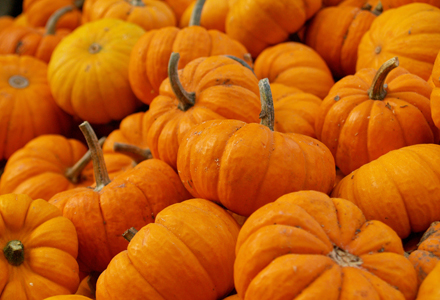 For most October 31st is known as Halloween and is a night for dressing up, telling ghost stories, having spooky parties, trick-or-treating and pumpkin carving. What most people don’t know is that Halloween is actually based on an ancient Celtic holiday known as Samhain, which means “summer’s end”.

It was the end of the Celtic year, starting at sundown on October 31st and going through to sundown November 1st. It was a night to honour loved ones that had passed on since apparently the veil between their realm and ours is at its thinnest on that night.

Celebrated for centuries by the Celts of old, Witches and many other nature based religions, it is the most magical night of the year. It is the Witches’ New Year, and the Last Harvest. Although the religious significance of it may have passed, Halloween is a “magical” night for all!

Halloween festivities are not complete without a pumpkin carved into a jack-o-lantern.  When you’ve carved your masterpiece use the fleshy inside to make a delicious soup.  Check out our video below to see how you do it.

A pumpkin is really a squash, and comes from the same family as the cucumber. They can be grown all over the world but most popularly in Illinois, America.  Pumpkin carving was taken to the US by the Irish, who started carving turnips for their annual Samhain holiday. They soon found that pumpkins were easier to carve than turnips.

There are over 50 different types of pumpkin and they have great names such as Spooktacular, the Funny Face and the Munchkin. The smallest pumpkins can weigh as little as 2 lb, whilst the largest you can commonly grow can weigh over 150 lbs. You’ll need a big garden for that one!

The biggest pumpkin ever grown weighed in at over one tonne!  In fact it weighed 2009 lbs and was grown by a man from Rhode Island who already held the record for growing a beast of a pumpkin weighing 1500 lbs.  Perhaps we should give him a run for his money in our allotment.